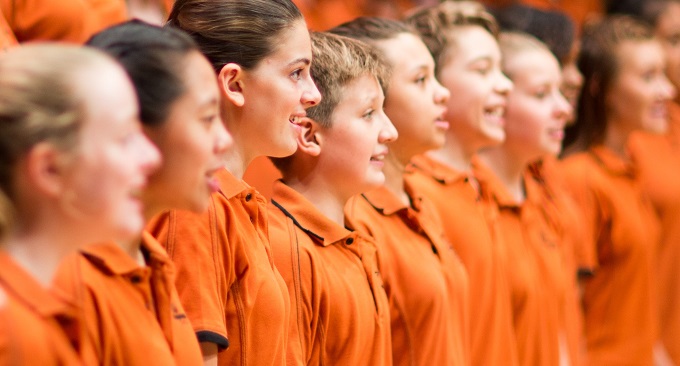 Over 300 young musicians from across Australia descended on Macquarie University in January for Gondwana National Choral School 2016. During the two weeks more than 40 pieces were memorised, 7 new songs were premiered, hundreds of kilometres were walked and hot days were tempered by ice block deliveries.
The success of National Choral School is dependant on many people and many factors, but it certainly couldn’t happen without the huge commitment from our supervisors. A sincere thank you from Gondwana Choirs for all the time and effort that you put into to making National Choral School run so smoothly.
This year Junior Gondwana was led by the dynamic trio of conductors Kate Albury and Paul Jarman and accompanist Andrew Basile. These energetic young choristers worked hard on a list of repertoire ranging from Paul’s own work, Moko, to an arrangement of a traditional Irish song, Shule Aroon.
A special addition to NCS 2016 was the Pilbara Project Choir. This choir comprised members of the Gondwana Indigenous Children’s Choir from Queensland, regional New South Wales, Northern Territory and the Pilbara region of WA. Conductors Lyn Williams and Liz Vierboom, pianist Jem Harding, choreographer Sani Townson and composers Felix Riebl and Ollie McGill made up their inspirational artistic team. They worked incredibly hard over two weeks to present the World Premiere of Spinifex Gum- a song cycle by Felix Riebl.
Gondwana Voices was led by Principal Guest Conductor Mark O’Leary and Christie Anderson, in her first Gondwana season, with Sally Whitwell at the piano. Voices and the Pilbara Project Choir worked together extremely closely, sharing warm-ups and combining some of their repertoire. Voices also worked with International Guest Artist Dr Brady Allred on the impressive Ešenvalds piece, Stars. With wine glass and singing bowl accompaniment, this piece was a favourite among choristers.
Rowan Johnston, Liz Scott and Alice Hanna made up the wonderful artistic team of Gondwana Singers. Singers climbed a mountain of repertoire, conquering the tricky Hungarian of Túrót eszik a cigány and bringing a gospel sound for Rollo Dillworth’s Freedom Train.
Gondwana Chorale was conducted single-handedly (although with both hand) by the fantastic Carl Crossin, supported by pianist (and percussionist) Luke Byrne. In preparation for their 2017 international tour, Gondwana Chorale worked on a wide range of repertoire, including a commission by renowned Australian composer Katy Abbott, Those other things and a Gondwana premiere of Luke Byrne’s Desert Sea. We missed Principal Guest Conductor Paul Holley during NCS but were thrilled that he was able to attend the final concerts.
Gondwana Composer School saw 7 budding composers work with Katy Abbott to write new works in less than a week that the choirs performed at an in-house concert. These composers also participated in workshops with Matthew Hindson, Paul Stanhope and Andrew Ford during National Choral School.
Conductor Graeme Morton and Accompanist Lauren Hannay ran a successful Gondwana Conducting Academy, with participants taking part in lessons and workshops, as well as conducting masterclasses with guest conductor Dr Brady Allred.
International Guest Artist Dr Brady Allred flew in from winter in the USA to join week two of National Choral School. Dr Allred worked with each choir throughout the week in addition to working with Gondwana Conducting Academy students. In the final concerts, Dr Allred conducted individual pieces with Chorale, Voices and Singers and then thrilled the audience with the powerful sound of the massed ensemble in selections from Leonard Bernstein’s Mass. Thanks to Daryl and Kate Dixon for their generous support that allowed Dr Allred to share his expertise and experience with all those at National Choral School.
The two final concerts on 23 January were presented at the excellent concert hall in the Concourse, Chatswood . More than 1000 tickets were sold to the concerts which culminated in the world premiere of Spinifex Gum – a song cycle by Felix Riebl and conducted by Lyn Williams. Gondwana Voices added their wonderful sound in two of the movements, and the piece culminated in over 300 National Choirs choristers on-stage for a spectacular version of Marliya, the work’s final movement. Thanks to the individual donors who supported the creation of Spinifex Gum, led by Commissioning Patron Vicki Olsson.