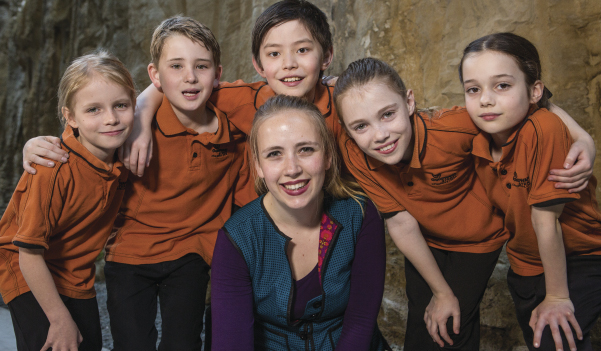 Alice Chance and SCC choristers at The Cutaway. Image credit: Barangaroo Delivery Authority
FREE PUBLIC PERFORMANCE AT THE CUTAWAY, BARANGAROO
Aurora Eora is the second public art commission in a series of Artistic Associate projects to be opened by the Barangaroo Delivery Authority, bringing the stories of Barangaroo to life through song and art.
As part of Sydney Children’s Choirs’ ongoing collaborations with cultural institutions in the city, SCC joined with Barangaroo Delivery Authority in September 2016 to produce a series of original compositions by Composer-In-Residence Alice Chance that respond to the Barangaroo site. Alice composed six original songs for various ensembles within Sydney Children’s Choir, with each song representing a moment in Barangaroo’s rich and diverse history. The songs reflect on the continuity of Australia’s First Peoples and tell the stories of the site, from Barangaroo and Bennelong’s first encounter with European settlers, to the colonial town, the Great Depression, Sydney Harbour and the urban city.
To respond to and animate these stories, the Authority and Lendlease have partnered with Art Month Sydney for the curation of an outdoor exhibition of original contemporary artworks by acclaimed contemporary Australian artists, Reko Rennie, Tony Albert, Karen Black, Joan Ross and Gemma Smith. The artworks will be installed around Barangaroo’s restaurant and commercial precinct and at Nawi Cove and will be on public display until 28 May
PERFORMANCE DETAILS
You are invited to a free twilight concert on Saturday, 25 March at 7pm at the Cutaway, Barangaroo.
Join more than 300 choristers from Sydney Children’s Choir, led by Lyn Williams, as they perform all six songs by Alice Chance.
The Cutaway at Barangaroo will also house Aurora Eora, a sublime sound installation for three weeks from Sunday, 26 March to Monday, 17 April (free, open 10am–5pm). The large-scale sound installation transforms the recording of Sydney Children’s Choirs’ Aurora Eora songs into an immersive harmonic experience like no other. An animated version of all the artworks will be displayed on a digital screen at the Cutaway to accompany the sound installation until Sunday, 16 April